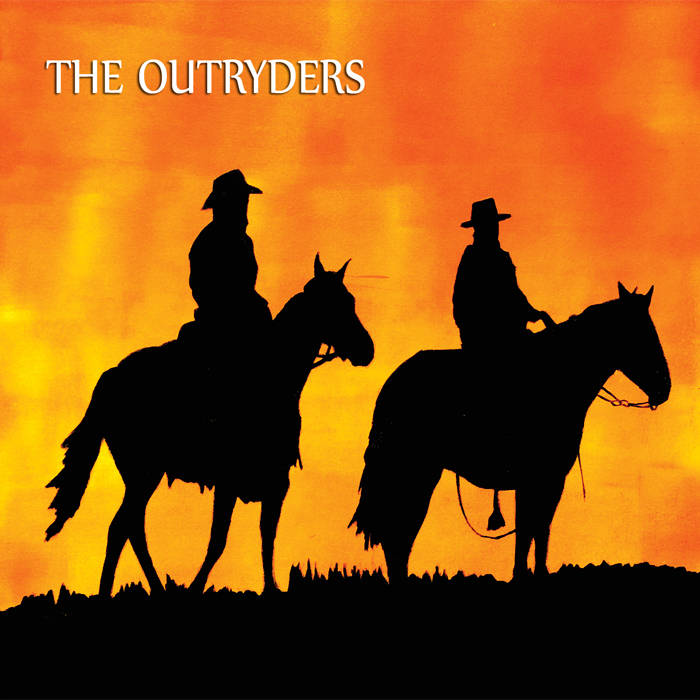 The Outryders make no apologies for the fact that they are happily stuck in the period of late 80s and early 90s melodic guitar based pop. They mostly don’t care what happened before or after this time. With names that would not be out of place on the cast list of a 60s Sergio Leone spaghetti western, the Outryders’ Joe Algeri (Jangle Band, The JAC, Britannicas, Jack & the Beanstalk, Summer Suns) and Paul Colombini (Roadstar, Fuzzswirl/Ammonia, Cherrytones) play a brand of power pop that is influenced by the Sunnyboys, Huxton Creepers, and Jesus & Mary Chain.

Joe, who is currently vying for ‘the person who can be in the most bands at any one time award’, takes a slightly different approach with the Outryders. Here the 60s beat influences are less obvious and a crunchier, harder edged guitar extravaganza dominates proceedings without any loss of melody.

The Outryders have been friends since their school days so it’s probably no surprise that their debut single reflects on the naivety of youth and growing up away from city life. Urban rock by fringe dwellers if you like.

Hipsters please carry on, the Outryders are completely ignorant to the latest musical trends. It’s timeless we say.

Enjoy The Outryders, available for download and very limited number of CDs on 9 October.

Joe Algeri strikes again! The renowned Australian-based singer, songwriter, multi-instrumentalist and producer, who currently holds membership in the Jangle Band, the Britannicas, and the JAC, has birthed yet another cool group in the form of the Outryders.

Teaming up with guitarist and singer Paul Colombini (whose resume includes boss acts like Roadstar, Fuzzswirl/Ammonia, and the Cherrytones), Joe Algeri further tapped noted solo artist Herb Eimerman (who also plays in the Britannicas_ to handle bass on the Outryders’ debut single. Drummer Mark “Sid” Eaton (from the Jangle Band, the JAC, and the City Views) also appears on “Over the Scars.”

Considering how much talent rests in one region, it’s inevitable that whatever the Outryders create would be nothing short of superior. Authored by Paul Colombini, “Over the Scars” (backed by “Look at What You’ve Done” on this Egomaniac Music single) demonstrates a commitment to a stripe of pop rock, that no matter what the fad of the day may be, will always stir the heart and tingle the spine.

Resonant vocals, conveying equal amounts of warmth and force, twinned with ringing guitars crusted with distortion, place “Over the Scars” and “Look at What You’ve Done” somewhere between a brooding goth pitch and a high-octane power pop bite. Breaks and rhythms pushing, prodding, and pulling with excitement, fused with catchy harmonies and tuneful melodies gliding and grinding with excitement conclude the event.

By applying the sonic dialogue of bands such as the Dentists, Gigolo Aunts, and the Jesus and the Mary Chain to their own sound and vision, the Outryders effectively transmit images of the past into a portal of the present. “Over the Scars” and “Look at What You’ve Done” show the guys getting off to a great start, that no doubt paves the way for more smashing songs.

Australian singer/multi-instrumentalist Joe Algeri has often turned up on Broken Hearted Toy because of the amazing way he balances his prolific solo career with being in countless bands involving musicians located around the universe. His latest adventure finds Algeri serving as half of a 1980s/90s-drenched duo called The Outryders with guitarist/backing vocalist Paul Colombini. This time out, he doesn’t need the magic of modern technology to collaborate, since Colombini is a close friend from Algeri’s high school days, who has previously performed with the bands Roadstar and Cherrytones.

Both of the power pop tracks on The Outryders’ debut single were written by Colombini, and he shows a knack for catchy melodies and lyrics that focus on the painful side of relationships. On “Over The Scars,” Algeri’s vocals (with Colombini backing him) sell the conflicted emotions of a guy who wishes his ex-girlfriend were around to see how well he’s gotten over her. Guest musicians Herb Eimerman (Joe’s mate in The Britannicas) on bass and drummer Mark “Sid” Eaton create a driving beat that adds to the song’s appeal.

The emotional damage inflicted in “Look At What You’ve Done,” with its chorus of “ Wake up! wake up! wake up!” seems more the result of someone being careless than mean-spirited. Still, the lyrics also complain about being deceived. Colombini is particularly impressive on guitar and harmonies while Algeri sings lead and plays all the other instruments. The single is available for download on Algeri’s Bandcamp page.