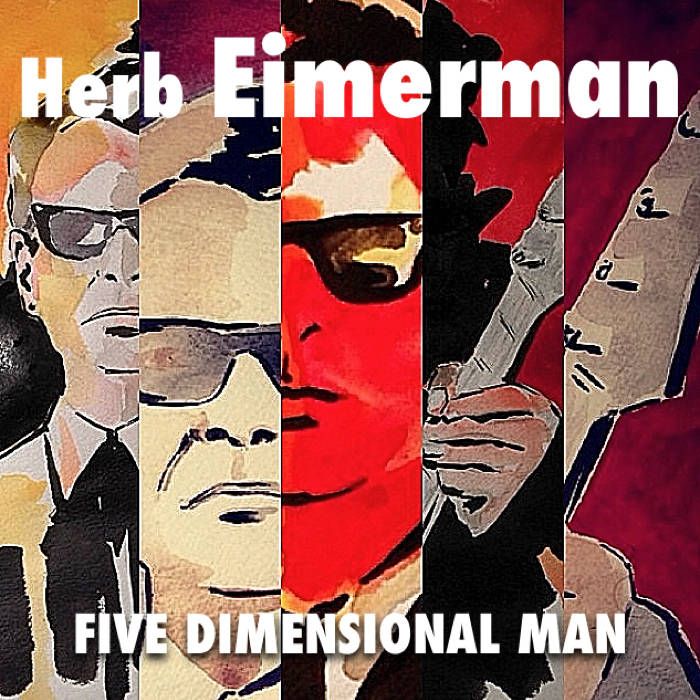 Kimberly Bishop BC I love Herb’s music and he looks like Jack Nicholson but better😉 Favorite track: Just Wishful Thinking.

Whilst most of his peers are resting on the laurels of their back catalogue, Herb Eimerman has the creative zeal of an artist half his age.

Heavily influenced by the music of The Beatles, The Byrds, and Badfinger, Herb released solo albums in '90, '92, The Nerk Twins project with Jeff Murphy of Shoes in '97 and returned to his solo work with releases in '02, '04, and '06. As principal vocalist and bassist for The Britannicas, Herb’s international reputation was affirmed with releases in '10, and the much-heralded High Tea in '14.

The Five Dimensional Man EP sees Herb return to his home-based DIY roots with Joe Algeri at the helm of the producer’s desk half a world away. Written and recorded in his Under The Dome studio in Lake Villa, Illinois, Herb played most of the instruments except for drums by Stefan Johansson in Stockholm, Sweden.

The depth and breadth of Herb’s song-writing prowess is perfectly illustrated on this latest 5-song release. The EP opens with the sarcastic rocker Just Wishful Thinking drenched in distorted guitars and a thundering rhythm section pulling influences from Weezer and Sugar. Live To Tell is more familiar territory with ringing Rickenbacker 12 string and joyful, optimistic lyrics. Believe That I Do recalls travels through and the breath-taking beauty of Central America. The international theme continues with love and the tyranny of distance in Sentimental In Berlin, a ballad that mixes Led Zepplin rock aggression. The EP closes with Something, a 3am ballad that will have you completely awake by the chorus.

Enjoy the five dimensions of Herb Eimerman, available for download and very limited number of CDs.

Calling forth from Lake Villa, Illinois, is Herb Eimerman, who for the past two decades, has been cutting discs that have duly earned him gold stars.

Here on the universally acclaimed singer, songwriter and multi-instrumentalist’s fifth solo effort, Five Dimensional Man, he not only retains the kind of supremely shaped pop rock sounds he’s lauded for, but explores new ground as well. Herb Eimerman’s five-track EP is produced by all-around music guy Joe Algeri, who also contributes a bit of drum and keyboard work to the project, while Stefan Johansson plays drums.

Powered by a hive of buzzing guitars dappled with distortion, “Just Wishful Thinking” evokes the heart and soul of bands like Teenage Fan Club and Weezer, “Sentimental In Berlin” artfully incorporates slow-burning currents with an urgent tension, and the teapot whimsy of “Believe That I Do” glows with grace and goodness. Not to be confused with the George Harrison song of the same name, Herb Eimerman’s “Something” is a moody ballad, and “Live To Tell” jingles and jangles to a punchy beat in the style of Shoes and the Records.

Snapped tight with fleshy melodies and industrious arrangements, Five Dimensional Man (Egomaniac Music) contains a compelling cast of colors and characteristics that bring out the best in Herb Eimerman. His vocals are fit and fluid, and the instrumentation is fresh and exciting. By wedding heritage pop rock fashions to contemporary overtones, Five Dimensional Man locks in as a mighty worthy statement. Herb Eimerman is indeed a man of varied dimensions, and it will be interesting to hear what his next move will be. Bravo!

Fellow American popaholic Herb Eimerman steps out with his newest 5 song EP called “Five Dimensional Man”. It’s pure Power Pop energy on this one exploding out of the gate with the Dwight Twilley/Marshall Crenshaw-esque barn burner “Just Wishful Thinking”. “Live To Tell” treads the jangly guitar twang of The Byrds’ 12-string Rickenbacker sound and delights as Eimerman’s vocal recounts the 1960s era Cat Stevens (when the holy one was a UK pop icon). Similarly, the lovely bittersweet ballads “Believe That I Do” and “Something” (not the Beatles tune) touches on Stevens’ troubadour period vocal wistfulness. The one surprising track here is “Sentimental Berlin” which opens with an almost Nine Inch Nails ‘90s flurry and then settles into more harmonic R.E.M. alternative territory. Overall the record establishes a new definitive tone and direction for Herb. Can’t wait to hear the next full-length release.

Chicago-based musician Herb Eimerman has spent much of his career playing alongside others -- with Jeff Murphy of the Shoes in the Nerk Twins and with fellow pop pundit Joe Algeri in the Britannicas. However, it’s his solo outings that have fostered Eimerman’s reputation as a melodic songsmith capable of proffering instantly engaging melodies with a radio-ready sensibility. Nevertheless, he’s yet to win the audience he so clearly deserves, an unfortunate fact referenced in the title of one of his previous albums, ironically entitled Just Barely Famous. Whether #Five Dimensional Man makes a difference in his standing remains to be seen, but if impeccable tunes and easy accessibility matter at all, then Eimerman is clearly on the right course. A five song set, its lush harmonies often recall those of the Byrds, especially on songs such as “Believe That I Do” and “Sentimental In Berlin,” two songs that find him firmly entrenched in Americana realms. The infectious “Just Wishful Thinking” makes for an impressive album opener while the drive and jangle of “Live To Tell” offers further evidence of his winning ways. By the time things come to a close with the heartfelt “Something” Eimerman’s made his mark. Five Dimensional Man is superb from start to finish.

If naming a song “Live To Tell” is cheeky but good natured, naming another song on the same EP “Something” is just plain looking for trouble. But that is just what Herb Eimerman does on his fabulous Five Dimensional Man. Herb is the bassist and singer for The Britanicas, who gave us last years power pop album of the year, High Tea, and his latest album is a worthy continuation ofr beautifully arranged rock songs with melodic twists in its tail.

This time round Herb wrote sang and played everything except for the drumming by Stefan Johansson, the record was produced by Joe Algeri -or if you prefer, it is a White Album type of Britannica, concentrating on one musician. High Tea lovers should have no problems embracing Five Dimension Man and while sharing a name with both George Harrison (and a little James Taylor) is a fool’s errand, "Something” is a fine song and though that might sound like faint praise, just try “Live To Tell” for a deeply soulful pop track that more than survives the comparisons to the dissimilar Madonna track.

“Just Wishful Thinking” is smart, drum heavy rocker that will get you out of your chair and when you settle back, check out “Believe That I Do” for the single loveliest song of the set; it sounds like the Byrds covering Beatles For Sale, with a clear and ringing production by Joe.

According to the press release “Herb released solo albums in ’90, ’92, The Nerk Twins project with Jeff Murphy of Shoes in ’97 and returned to his solo work with releases in ’02, ’04, and ’06.” which would make nine years between solo outings but it is worth the wait. “Sentimental In Berlin” has some of the proto-psychedelia vibe you might get from early Apples In Stereo and a haunting lyric “it takes a long time to be young…” is a hard to deny aphorism.

In taking the standard issue power pop and playing with different genres inside them, Herb does add a dimension to every song, it is like an added gift on the gifted recording.

Sounds like the power pop record of the year to these ears.

We’ve been playing the great Herb Eimerman’s music on Pure Pop Radio almost since the old, weekly show began in 1995. We instantly fell in love with his sweet, lyrical sound, and have frankly been in love with it ever since. Which is why we were thrilled to find that Herb has released a brand-new EP, produced by the equally great Joe Algeri. So greatness ensues and, to prove it, we’re playing four songs in rotation, like the gentle, Roger McGuinn-esque folk-pop of “Believe that I Do,” heard during last week’s Pop Tunes deejay show; and the fragile ballad, “Something.” Also spinning: “Live to Tell” and “Sentimental in Berlin.” Essential.

Herb Eimerman is no stranger to power pop, influenced by The Beatles and The Byrds he’s been releasing solo albums since the ’90s, worked on The Nerk Twins project with Jeff Murphy of The Shoes and has been a vocalist and bassist for The Britannicas.

On this new EP, Eimerman contrasts manic guitar strumming (similar to Bob Mould) with his understated vocals on “Just Wishful Thinking,” then the familiar Rickenbacker guitar returns on “Live To Tell.” Herb channels Roger McGuinn on the folk-pop of “Believe that I Do,” making it a compelling personal statement. Each song has its own emotional component (dimension) worth exploring. Keep on rockin’ Herb!

Herb Eimerman, who has been the American one third of the international power pop/neo-1960s trio The Britannicas for some years now, plays just about all the instruments and does all the vocals on his recently released EP Five Dimensional Man. It might seem like he's copying his fellow Britannicas member Joe Algeri's one-man band side project The JAC, but Eimerman has recorded a number of solo efforts in the past. He also joined forces with Jeff Murphy from Shoes for The Nerk Twins.

Eimerman continues to place a strong emphasis on catchy melodies on Five Dimensional Man, but he also underscores the EP's title by venturing beyond his Byrds-Beatles comfort zone. The acoustic-based "Believe That I Do" is a spiritual meditation set to an appealing, light arrangement, and "Something" is a well-crafted love song. "Sentimental In Berlin," which features Algeri on keyboards, slides through numerous tempo changes. "Just Wishful Thinking" finds Eimerman succeeding with a more hard-edged approach that showcases his guitar prowess along with a defiant attitude. "Live To Tell" is more familiar territory for him, as he delivers a fun mix of layered vocals and jangling guitars.

Mixed and produced by Joe Algeri

Kyle McNeill joins the show to talk about his new project, Phantom Spell