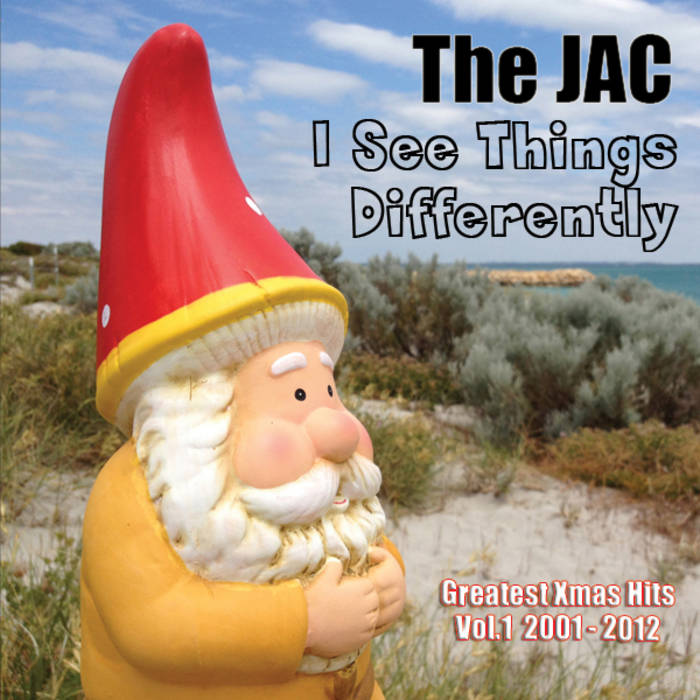 Serious, nice, warm, funny, meant to be funny, not funny at all or just odd.

"I See Things Differently" is a compilation of various (vaguely) Christmas themed songs that have been released annually over the past decade. More than any festive message or specfic statement, these tracks simply chronicle my misadventures in DIY home recording plus the more eccentric and offbeat offerings that would set the blueprint for the JAC album, "Faux Pas".

Many thanks to various friends who have come along for the ride over years. Check out the individual song pages for lyrics and more info about each track.

Whatever you do or don't believe in, all the best to you and yours for the festive season.

Aigeri has long taken a less travelled approach to the Christmas carol which is beautifully summed up when compiled together on the full-length I See Things Differently.

The JAC go on a world tour much like Mr Claus and f ind themselves in Stockholm in 1965, have a Psychotic Summer where Christmas is hardly mentioned and celebrate celebrity during a Chris Hillman Christmas. Merry Christmas (Around The World) is not the tune that Hi-5 trot out every year at the Myer Music Bowl, but it is a fine slice of catchy pop in its own right.

There is no doubt that The JAC see things differently as they take Santa for a surf, see him with a firearm and even find time to ponder Cindy Brady for Christmas. There is no doubt it's not your average festive fare. And when Algeri draws on some Jesus & Mary Chain sounds for Going Down, you now that he extends himself over Christmas more than the rest of us.

Singer-multi-instrumentalist Joe Algeri has been recording Christmas songs for over 10 years, and he's collected some of his favorites on I See Things Differently. Now known as The JAC, he has an obvious love of 1960s pop as well as an offbeat sense of humor. The JAC not only takes a different view of Christmas than most people, he offers an alternative perspective on nearly every track.
______________________________________________

Now there’s nothing wrong with traditional Christmas tunes, but let’s be honest, such constant airplay can become rather boring after a fashion. Well, have no fear, as I See Things Differently: Greatest Xmas Hits Vol.1: 2001-2012 (Egomaniac Music) is the perfect alternative to stock-and-trade holiday music.

The majority of songs here were recorded by the JAC, which is actually a vehicle for the universally admired Australian based singer/songwriter Joe Algeri, while the equally revered Britannicas and Green Beetles contribute a tune a piece.

Real-deal pop music, bursting at the britches with herds of heavy hooks and squads of sparkling harmonies, is what the bulk of these instantly infectious songs are scripted of. The lyrics are colorful and clever, which arrives as no shock, since Joe has always proudly cited Ray Davies as a prime influence.

The JAC kindly bestow a Christmas gift upon us to help us get into the spirit of the season. These 15 tracks of seasonal joy don't follow your usual stylings of Christmas songs (as the title suggests) and may not be suitable for your Granny, who likes to sway away to Cliff's "Mistletoe and Wine" or some other piece of dirge that gets rammed down our throats at this time of year, this is a refreshing take on seasonal songs that won't drive you mad. Light the fire, throw on a yule log, stoke it up with all those old Christmas best of's albums and play The Jac loud!
______________________________________________

Joe Algeri (Jack & the Beanstalk, The Britannicas) is a songwriter/producer from Perth, Western Australia who is also know as The JAC. He’s got an off beat sense of humor and an instinct for great rock and roll. Listen to the highlights “Merry Christmas (round the world)” and the surf-syled “Psychotic Psummer.” Lots of great music here, its even better than his recent Faux Pas album. The bittersweet humor of “Santa All I Want (Is Cindy Brady) ” and “Computer Xmas” are also sure to impress. It also includes tracks from his other bands, The Britannicas and Green Beetles.

Joe with a bunch of friends from around the world.

Kyle McNeill joins the show to talk about his new project, Phantom Spell