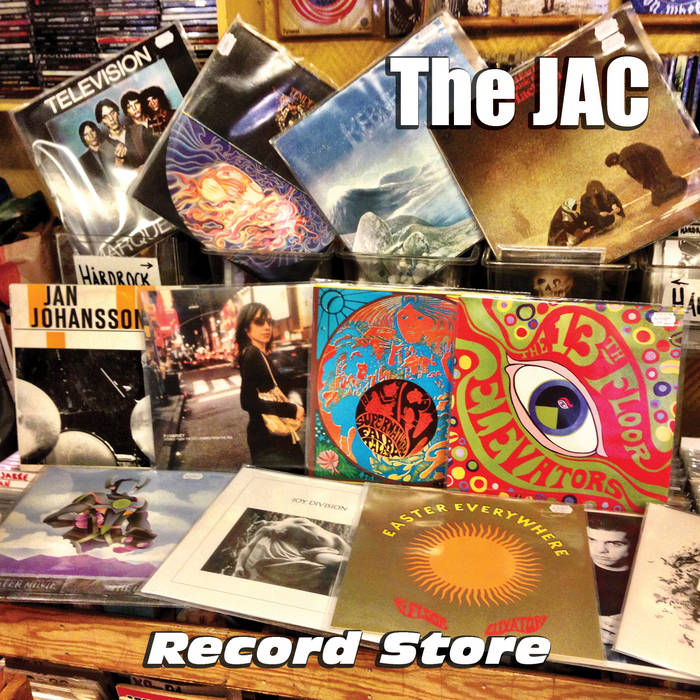 Joe Algeri returns with a special Record Store Day single, fittingly titled Record Store and its colourful power pop of the highest order, featuring an impossible-to-misplace melody, lusciously layered backing vocals and a sweet paisley guitar line. A love story not only to the girl who works in the store, but also the store itself, Record Store is a great addition to your Record Store Day swagbag.

In the finest vinyl tradition (though this is only available digitally for now, some of the funds from the digital sales of these songs will go towards manaufacturing a vinyl version), the single is backed by a few quirky goodies – Fuck It is an 84 second blast of angerpoppunk; while Neil Young’s Heart Of Gold’s vocals are synth treated enough to sound like Daft Punk playing out front of a solid rock band. Sin City retains all the twang and grit of the original Flying Burrito Brothers: all that’s lacking is a nudie suit and a bottle of tequila.

Algeri (as The JAC) is pure class all the way, a relentless musical explorer with the golden touch for melodies and arrangement and an endearingly kooky sense of humour. Check him out sometime – you’ll be glad you did.

Just in case you missed out on “Record Store Day” goodies, Joe Algeri (Jack & The Beanstalk, Britannicas) has a gift for you. This is an extended single from the forthcoming album, ‘Whether I’m Arthur or Martha.’ The single is a rocking tribute to the Record Store experience and a great addition to you playlist. Next the punk anthem “F•ck It” is very much in the spirit of The Sex Pistols, and a cover of Neil Young’s “Heart Of Gold” sounds like it could’ve come from Neil’s ill-fated Trans album. Hey this is great free stuff, Joe. Keep it comin’!

The four tracks that make up this EP meanders through different genres (if you like to pigeon hole things) and not only delivers the classic sound of The Jac's Power Pop influences but also dips into a bit of electronica and country and their rendition of these styles is tastefully done and fun, bloody good fun!

For the uninitiated, the JAC is actually a vehicle for the mercurial musings of singer, songwriter and multi-instrumentalist Joe Algeri.

Hot on the heels of the JAC’s excellent debut album Faux Pas arrives a comparably intoxicating disc Record Store (EGO Records), which features an array of equally talented and respected folks from the independent music scene — including Herb Eimerman of the Britannicas, Stefan Johansson from the Lemon Clocks, the Coalminer’s Sect’s Jason Clearly and former Tricks member Phil Barry.

The title cut of this effort starts out voicing the pleasure of shopping in one’s favorite music shop, then ends with a sad commentary on the demise of such operations. Saturated with circles of commanding guitars, stirring harmonies, muscled melodies and a slaving backbeat that attacks each cell of the body, Record Store skillfully crosses hummable pop insights with the drive and intensity of bands like the Who and the Replacements.

Dripping with snot and sass, the brisk and blunt “Fuck It” rushes forth with mean and lean rhythms, a sleepy-eyed version of Neil Young’s “Heart Of Gold” examines the JAC indulging in the beeping joys of electronica, and the Flying Burrito Brothers are given credible homage on a loyal treatment of “Sin City,” which was recorded in a mere four minutes with a single microphone.

Covering everything from punk rock to power pop to country to experimental sounds, Record Store may be schizophrenic, but the songs are so good and delivered with honesty that they practically transcend genre-labeling. Australia has always been praised for its inspirational artists, and in the shape of the JAC, here’s a true blue testimony to their knowledge, understanding and dedication of merited music.

But the four-track disc is simply a sneak preview of what lies ahead, as the JAC will soon be releasing a complete album. And judging from what’s offered on Record Store, you can bet your booty it will be a gold-star winner!

There was a time in the ‘90s when Joe Algeri was on almost any line-up at any of the favoured original music watering holes. From then he travelled to Europe and became better acquainted with women’s clothing until settling in Sweden for some years. Now back in Perth he is hitting his home studio with the regularity that he used to have for the stage. Record Store is hot on the tails of the debut The JAC album and a collection of Christmas ditties.

The title track is the kind of power pop gem that Algeri can conjure on autopilot, while remaining as solid a tune as he has penned. If you are a fan of chiming guitars and a melody that won’t let go then this doesn’t disappoint. Fuck It could be Algeri’s first foray into punk like territory and its aggressive minute-and-a-half is probably a result of him venturing too close to the Armadale line.

The advantages of having your own studio is evident with the electronic take on Heart Of Gold. The vocoder is given a good working over as Algeri turns Neil Young into a Mi-Sex sounding classic. Its pretty difficult to ruin a Gram Parsons tune, and this acoustic version of Sin City was always going to be in fine hands with farm boy Algeri.

Record Store is another ripper from Joe Algeri. You too should get The Jac!

It's a digital four-track single for you and a promo CD for me. We normally don't review "promo only" items but all these cuts are available digitally. If you're a fan and you ask hard enough, The JAC (aka Joe Algeri) might burn a physical copy.

"Record Store" is a cracking pop song, a multi-national (as in collaboration of players from West Australia and Sweden) effort that mixes jangling guitars with sheets of power-pop chording. It's very much in the vein of Algeri's old outfit Jack And the Beanstalk, who bore more than a passing relationship to fellow Perth travellers The Stems and The Chevelles, so you know it's good.

"Fuck It" is a blink-and-you-miss-it minimalist rant while an ethereal cover of Neil's "Heart Of Gold" (synth pop like "Trans") and a bare bones - no, skeletal - take on The Flying Burrito Brothers' "Sin City" bring up the rear. With the exception of "Heart Of Gold", they feel a bit throwaway but if you want fully realised, you'll have to wait for the next album.

Australian musician and studio wizard Joe Algeri, recording as The JAC, crafts an energetic tribute to a dying breed of retail outlets with his new CD single, “Record Store.” Taken from the soon-to-be-released album, Whether I’m Arthur Or Martha, this would would make a great theme song for Record Store Day. Algeri’s clever lyrics capture the joy of searching bins for vinyl rarities and discovering new bands on the overhead sound system. He also throws in a tale of unrequited love.

“When I walk in I always feel so fine,” Algeri notes, and his visit improves even more when he confers with an attractive employee about bands like Big Star. “I’ve got my Motorhead t-shirt on/Even though I only like three songs,” Algeri sings, adding another band reference. The arrangement is more pure power pop than Algeri’s previous efforts as The JAC, or his work with bassist-vocalist Herb Eimerman and guitarist-vocalist Magnus Karlsson in the 1960s-inspired The Britannicas. Eimerman helps out on “Record Store,” along with musicians Stefan Johansson, Phil Barry, and Jason Cleary.

“Record Store” ends with a double disappointment for the enamored customer when he arrives to find his favorite clerk has left and the store is having a going out of business sale. Sad, but all too true these days. The CD single comes with three bonus tracks, including The JAC’s interpretation of how “Heart Of Gold” would have sounded if Neil Young had recorded it for his later, more techno-oriented release, Trans.

Joe Algeri is at it again, cooking up another fun, power pop anthem for The JAC in the uptempo smash, "Record Store." About as perfect a rocking pop number as there is, "Record Store" sports an ultra-catchy melody, great vocals and a strong hook. And, what's more, it makes you want to play it again as soon as it's done spinning. It's pretty damn infectious, and you'll be hearing it very soon on Pure Pop Radio.