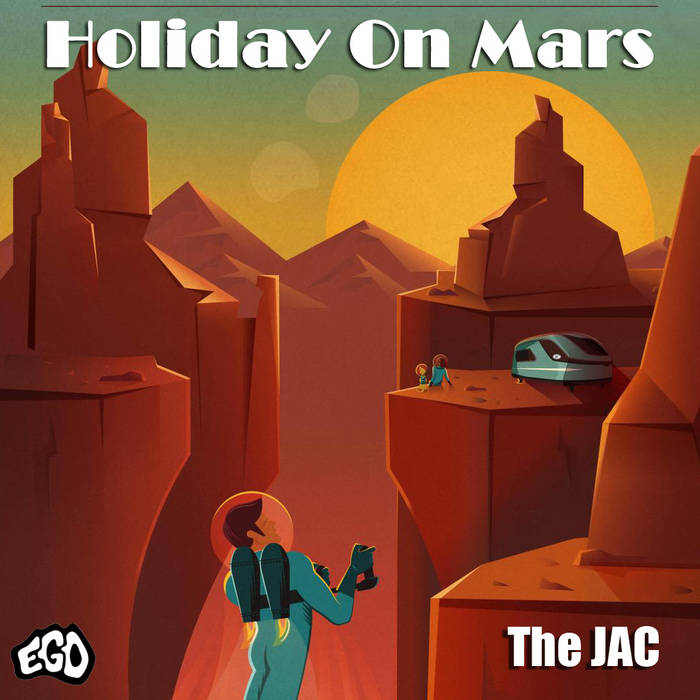 Every year I'm honoured to be invited to document the recording of the annual festive song by the JAC 'Christmas Crew'. This year's track "Holiday On Mars" was just as bizarre and bewildering as anything from the previous 14 years.

The song started as a piano ballad and Joe's first guest, his high school friend Paul Colombini, told him to speed it up as he added the first rhythm guitar at Bordello Studios. A rocked up basic track was completed and Joe invited Paul to travel with him to meet up with the rest of the Crew to finish it off. When Paul realised this involved a plane trip that would take him more than 35 kilometres away from Kalamunda, he politely declined and had no further involvement in the project.

The regular crew met outside the security gates of Cape Canaveral in Florida, USA where Joe advised everyone of some vague plans to be the first band to record in space. I must say, Joe's bravado and sheer stupidity never ceases to amaze me. Unfortunately for Joe, his negotiating skills weren't as persuasive as he thought and within 24 hours NASA officials contacted the FBI who then classified the whole group as a 'security risk' and promptly deported them from the US. Poor Herb had to suffer the humiliation of being kicked out of his own country because of his association with these 'suspicious foreigners'

Luckily for Herb however, the band relocated to Costa Rica where he'd been wanting to take the guys after the failed attempt in 2014. They found a little studio in the French quarter of San José which bizarrely was now run by Jean-Pierre Li who the guys had recorded with at Suce Ma Bite Studios in Quebec City, Canada back in 2013.

It was a surprisingly quick and hassle-free recording session with Joe, along with Herb, Stefan, Andy, Terry and Lars (who travelled with his home-made Theremin from Stockholm) recording and mixing a complete track in 47 minutes. In fact, the session would have been over sooner if it weren't for the fact that some other bandmates of Joe from Australia, Dave Wallace and Mark 'Sid' Eaton, had invited themselves over to also add backing vocals just so they could then sample a famous local dish known as "un plato de pollas".

Upon hearing the final mix however, Jean-Pierre advised that he would not release the master tapes unless it was a 'French' recording. Quick as a flash, Joe sent a fax to his friend Grégoire Garrigues in Paris who jumped on the first available Concorde to Costa Rica. Joe also paged his wife Erika and Ian Freeman back in Australia to get their arses over to help with some backing vocals for a new French part at the end of track. The problem was resolved in less than 24 hours and the band treated a very happy Jean-Pierre to a 6-pack of Budwieser Light.

The after party was a typically boisterous affair with many fat Cuban cigars consumed. In fact, apart from the Cape Canaveral fiasco the only other incident was Stefan, Terry & Andy being arrested for causing a disturbance at a local Mardi Gras parade that evening plus Dave and Sid suffering food poising after a massive feed of 'un plato de pollas'.

Shenanigans aside, their efforts were again worth it. Holiday On Mars is wonderful space rock seasonal song, these boys never let me down. Enjoy.

First, a quick PARENTAL ADVISORY as "Holiday On Mars" does contain one "s" word (although it clearly belongs and you've certainly heard far worse on basic cable).

It's not really officially the Christmas season until that Power Popping fool Joe Algeri makes an appearance. Joe's been making annual Christmas records since long before Jesus was born.

About every other year, I take a stab at trying to be as witty as the "liner notes" for Joe's annual Christmas record (which create the mythos of the recording sessions), but I always fall well short. At my best, I'm merely a half-wit.

Joe (aka The JAC) doesn't need the humor, though, because these Christmas treats are always so damn good. The latest is "Holiday On Mars", a spacey Rock number that features 12 musicians from 5 different countries (The Christmas Crew) and, this year, a theremin (cuz you can't do a space age Rock tune without a theremin). The tale of the taping and all the credits and lyrics are at Bandcamp. Also at Bandcamp is Joe's collection of past Christmas delights, "I See Things Differently", though none from the before Christ years (at that time, cavemen were more concerned with preserving their lives than preserving audio tapes; who knew Radio Shack would be extinct in 2000 years?). It's there for you to be had, astronauts and astronettes.

But, first, Joe had a few words. A portion of "Holiday On Mars" is in French. They had just finished recording that part of the song when...well. you know. I'll let Joe put it in his own words (with which, FWIW, I agree completely).
"Given recent world events, a song that laments the frenetic pace of modern life and the irritation of a commercialized festive season might seem like nothing more than a whine about very first world problems. We had just finished the French part of “Holiday On Mars” when the tragic events of Paris unfolded...
​
But the terrorists can just go screw themselves; I wasn’t going to change this year’s Christmas song for any reason. We will remain free to sing about whatever we damn well please including embracing, promoting, ignoring or even criticizing any religious practices and traditions.

Peace to you this festive season, enjoy the holiday on Mars."

It’s totally understandable how overwhelming the holidays can be, so if you’re one of those people who would like nothing better than to disappear from the hustle and bustle, here’s a song for you, debuting right here in this space.

Recorded by the JAC Christmas Crew (an international ensemble featuring members of the Jangle Band, the Britannicas, and the Outryders, to name but a few lauded acts) “Holiday On Mars” says to hell with jingle bells and down with Christmas sales. Powered by a swirling mass of skintight guitars, piercing hooks and King Kong sized harmonies, the wickedly catchy song is additionally enlivened by the zippy buzz of a Theremin, which suitably furnishes a spacy edge to the proceedings.

To be enjoyed any time of the year, “Holiday On Mars” melds the instrumental gist of “Telstar” with the kind of hard rocking pop rhythms employed by bands such as the Sweet and the Plimsouls, resulting in one heck of a shining gem. Seething with energy and sass, the JAC Christmas Crew not only know how to write a good and witty song, but they also know how to arrange and deliver such wares in a cool and courageous manner.

That noted, “Holiday On Mars” is out of this world – pun intended!

I want a holiday to Mars, pack your bags I know it’s far
Into deep dark space, release the rats and stop the race

I just want to lift my feet
Don’t need no light, I want some sleep
Deadlines into time
Water into wine

Sweet f.a. will be so nice
Just you and me and Jesus Christ
No internet or telephone
I want to be alone

I want a holiday to Mars, I wanna go so slow
And tan in a sandstorm of some frozen love