I Don't Want Your Presents 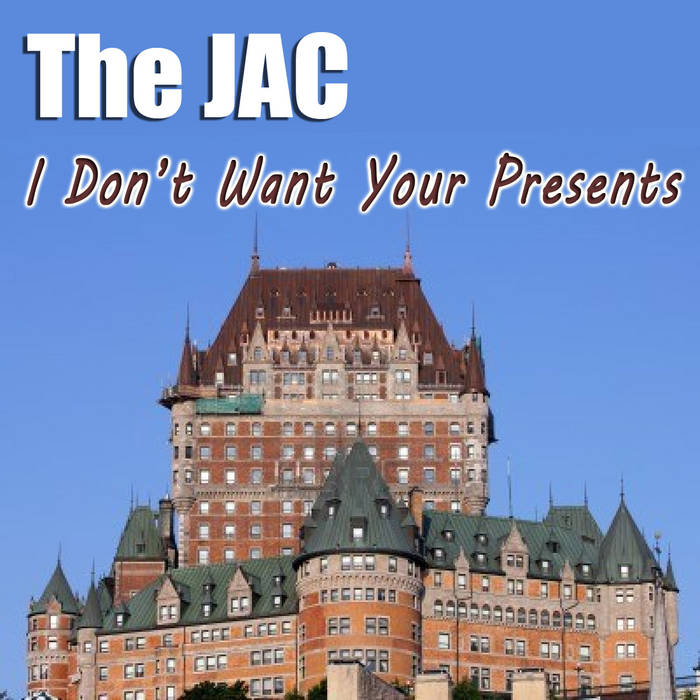 It's always a pleasure to be asked along to the recording of Joe's annual Christmas song that is now in its 12th year as an international recording collaboration.

We now seem to have consolidated line-up and this year Joe decided he should assemble the 'Christmas Crew' in Canada to get more of that northern hemisphere festive feeling. A problem however, was that they actually recorded the track in early October and Quebec was having an unusual Indian Summer.

Was it incident free? Of course not.

Joe and Terry shared a flight over from Perth and had huge fight mid-way when Terry casually suggested he wanted to play a bit of banjo like Mumford & Sons.

Upon arrival two full days were booked for 2 & 3 October at Suce Ma Bite Studios in Quebec City. The owner, Jean-Pierre Li, boasted about once doing demos for Nickelback and Celine Dion. Upon hearing this, the band had a quick meeting and decided that Jean-Pierre's services would not be required and that they simply wished to hire the studio without him. They offered him a 6 pack of Budwieser and Jean-Pierre happily handed over the studio keys.

After the final mix was the traditional after-party and this is always great fun. Notably the boys have taken a particular liking to Herb's Cuban cigars... but where was Terry? Unbeknown to the others Terry bribed Jean-Pierre with 2 cans of Budweiser Light. He was allowed back in the studio and he promptly added banjo to the mix. Joe only found out when he got to Australia and he was furious.

Shenanigans aside, it's another hook and harmony laden track to warm you this Christmas. Enjoy… Herb finally gets his way; it's Costa Rica in 2014!

Australian singer/multi-instrumentalist Joe Algeri has a history of releasing pop-oriented Christmas music. A few years back, he recorded “Chris Hillman Christmas” with The Britannicas, an international trio that includes himself, Swede Mangus Karlsson and American Herb Eimerman. The chiming, heavily 1960s influenced song was a combination tribute to The Byrds’ guitarist and a fun celebration of the season. In 2012, performing under the name The JAC, he put out a full-length CD of off-kilter holiday songs titled I See Things Differently.

The JAC is the latest incarnation of Australian legend Joe Algeri, who has been recording annual Christmas songs since the Internet was young. Sometimes Joe goes all experimental, sometimes sweet, sometimes Swedish, sometimes kitchen sink Spector, and sometimes awesome Power Pop. This year's outing, "I Don't Want Your Presents", reflects Joe's fascination with the sound of the Byrds (who could forget "Chris Hillman Christmas"?). And the result is a track you're going to want in your Christmas arsenal. Download "I Don't Want Your Presents" free at Bandcamp.

I don't want your presents, I just want your presence
I don't need your video call I need to feel your face
Over and over again
Please come home let's not
Be alone, all alone
On Christmas Day

The day's are getting longer but who cares about the weather
I can't wait another day, it's now and forever
Has Canada made you cold
Is there something that I
Do not know, will I be alone
On Christmas Day

I think we lost our connection
I can't see you, you don't hear me
I want real affection
Please don't go posting anything you're always late anyway

Over and over again
Please come home let's not
Be alone, all alone
On Christmas Day

Has Canada made you cold...

Featured on Vol. 8 of "Merry Rock against Bullshit Christmas" compiled by Maria Sokratis.