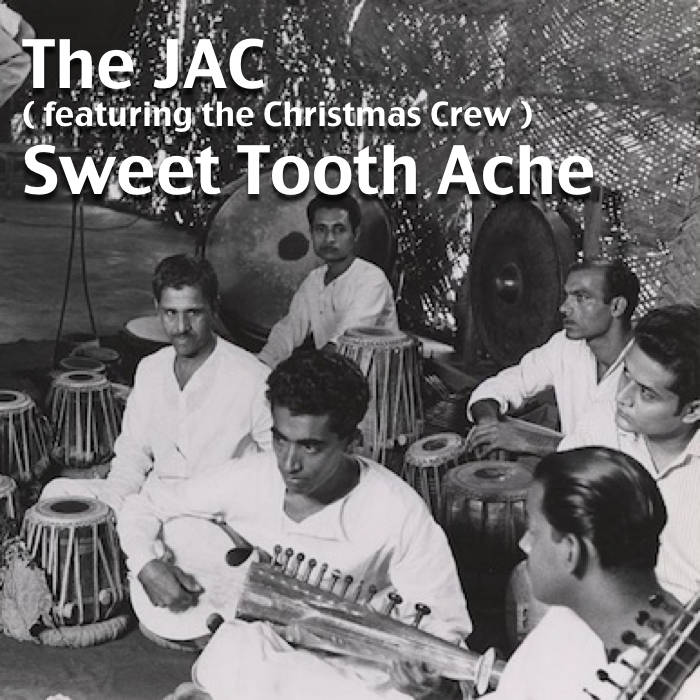 Joe had originally organised for everyone to meet in Costa Rica. Herb was the first to arrive only to find that Joe changed his mind at the last minute, it was now India. When Joe went to collect Herb at the Indira Gandhi International Airport he was greeted with a solid punch in the nose. I could sense this was going to be another eventful recording session.

Eventually everyone assembled at Big One Studios in downtown Delhi which is owned and operated by Rajneesh "Dick" Mahomedhasabigen. All had assumed that Joe was after a mystic Eastern vibe to this year's song but in actual fact he was also there to get some cheap dental work done that would save him over $150 compared to back home. This was particularly evident when everyone heard Joe's basic track for the first time, it was seemingly a standard 3 chord pop song.

Apart from Herb recording his bass and all his backing vocals in one take, it was an incredibly tedious and slow recording process.

Rajneesh had kindly organised the finest Indian session players to be present at the studio. They were forced to do nothing more than load in Andy's AC50 and Thölix guitar amps (that had to be shipped in from Finland) and then hold them still as Andy pounded them for feedback. Even worse was the fact that Lars also organised his own container from Sweden with sitars, tablas and timburas that he was insistent he was going to play himself.

By day 2 of tracking enough was enough, Dick slapped Joe. Straight to his face he said he and his band were the most pretentious Western musicians he had ever worked with. Unfortunately for Dick, he didn't realize that it was exactly the sort of attention that Joe relishes.

The fracas continued on day 3 when Terry and Joe had a scuffle over Terry not being allowed to record sleigh-bells. Terry sought his revenge during Joe's dentist visit the following day whereby he replaced some of Joe's Hammond and also added some of his own sarod and tambura.

Stefan remained remarkably calm through all of this but a couple of days after completing his drum track he had to leave Delhi falling ill after a particularly dodgy chicken vindaloo.

Also absent from the post-mix after party was Lars and Terry who ventured off to a training session at the ashram of Maharishi Mahesh Yogi and have not been seen since. Andy and Joe enjoyed the extra cigars that Herb always kindly brings to the party.

So what are we left with? Even with the mystic add-ons, we have another superb festive pop hit, the boys never seem to fail. Śubh krisamas (शुभ क्रिसमस)!

Finally, on a serious and sombre note, we sadly report that our mastering engineer, George Luif, passed away a week after the track was mastered.

RIP George, we will miss you.

Everybody claims to be the Fifth Beatle, but Joe Algeri was the 7th and three-quarters Beatle. That's my story and I'm sticking to it.

Though I don't have quite the history with Joe's annual Christmas songs that I do with Sofia Talvik's (it would be rude to link to that piece, here), he's been making them for many years, now, and I do look forward to them quite a bit. You see, Joe's annual Christmas songs are the surprise present under the tree. Sure, you got socks and underwear over there, that one's going to be a sweater, and I'm pretty sure this one over here is a board game. But, with Joe Algeri's presents, you never know what the hell its going to be. Might be your very own personal remote controlled drone. Or it might be fruitcake. You never know until you open it.

Recording as (with?) The JAC (and featuring The Christmas Crew), Joe's song this year is "Sweet Tooth Ache". Picking up where he and the rest of the Beatles left off (they can't sue me for that, can they?), Joe shows he was paying attention and knows exactly how to use sitars and tamburas in Power Pop. Pretty awesome stuff. It's Joe's best Christmas song since the last one (which was pretty damned awesome, too). And as an extra special bonus, Joe gives you some insights into the recording process which makes my sad attempt at humor, here, seem no better than a pathetic Bazooka Joe comic wrapped around some stale gum. Let's just make this easy: Joe's a genius. And he's done done it again. Grab "Sweet Tooth Ache" by The Jac at Bandcamp.

Australian multi-instrumentalist Joe Algeri is a member of the international power pop trio The Britannicas, and frequently performs as a solo artist under the name The JAC. Whether he’s working with the band or on his own, Algeri specializes in imaginative and clever lyrics set to catchy arrangements. Each year, right around this time, he applies that offbeat approach to an original holiday song.

For 2014, he gives us “Sweet Tooth Ache,” a sort of muscular take on The Byrds, built with sitar, fuzzy guitar, a strong melody, and harmony vocals. Somehow it mixes Christmas, a dentist, and a summer romance that fizzled in December. Algeri gets help from his American mate in The Britannicas, bassist-vocalist Herb Eimerman, along with assorted musicians from Sweden, Finland, and Australia. There are even extensive liner notes by a fictional rock journalist about recording this effort in India.

As he has done in the past, Algeri is offering this year’s holiday treat for free on his Bandcamp page.

In July you were the apple of my eye
I had a sweet tooth just for you,
Effervescent, there was nothing I could do
About love
And singing birds and butterflies
High above
Heart proof, sweet tooth

Now December seems so long
I feel a pain, the taste is so gone
Book my shrink and call my dentist
Tooth ache, heart break
How much more of this year can I take

Close the door cos’ I can’t feel it anymore
Leave the aspirin when you depart
There’s an empty suitcase, I don’t know where to start
About love
The feelings all decayed they will not
Wash away
I wasn’t fool-proof, sweet tooth

Now December seems so long
I feel a pain, the taste is so gone
Book my shrink and call my dentist
Tooth ache, heart break
How much more of this year can I take

Tooth ache, heart break
Nothing to save
How much more of this year can I take

Featured on Vol. 9 of "Merry Rock against Bullshit Christmas" compiled by Maria Sokratis.